Midway through the Second World War, German engineers toiled away at wildly imaginative prototypes of all shapes, sizes, and purposes, each meant to one up the Allies and inflict maximal damage.  From that experimentation emerged the Maus tank.  Conceived by the Germans in 1942 and trialed in 1944, the vehicle was envisioned to be a massive hulk of defensive and offensive destruction, and would have been the heaviest tank ever constructed.  The project was initially met with criticism due to the ridiculously large size of the vehicle; the crew of 6 would be enclosed in armor up to 18 inches thick, carrying a 128 mm main gun, a coaxial (a secondary gun mounted next to the main gun) 75 mm gun, and a 7.92 mm MG34 machine gun for soft targets.  After all was said and done, the beast was set to weigh 188 tons.  The overall size of the tank proved to be its greatest challenge, as the diesel engines were only able to produce a top speed of 8 mph, rather than the 12 mph that was intended; in addition, its weight would have made bridge crossings perilous, and overall mobility would have been compromised.  Two incomplete prototypes were built and tested, and both were later abandoned and subsequently captured by the Allies as they closed in on German forces at the end of the war. 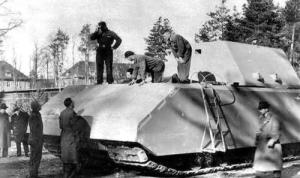 Follow musings at random. on WordPress.com
Join 560 other followers